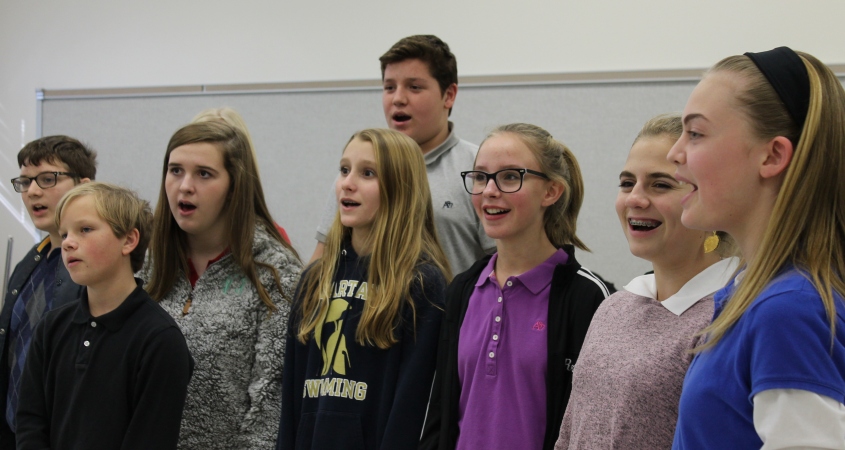 “What do we not do in class?” eleventh grader Mason Mattox said about music class. As Mattox slid into RaChael Holler’s Music and Drama IV without any prior theatre experience, activities such as “improv, exciting games, and rehearsals” pushed him outside of his comfort zone. “We have to do things like sing and act, which is uncomfortable sometimes, but even still you know that you’re surrounded by friends here and there’s nothing to worry about.”

Carols of the Christmas concert have been learned and performed, and now the class eagerly moves on to their next feat: the musical. After past performances of Into the Woods, Beauty and the Beast, and Peter Pan, the class decided at the end of last school year to put down the pixie dust and try something more sophisticated. The Music Man fits the bill perfectly.

“I’m excited about this musical…we have good actors and it’ll be a lot of fun, if we survive,” said upper school music teacher RaChael Holler, jokingly. “Since it’s more realistic, it’s going to be trickier making it believable.” With Holler’s five years of teaching and musical experience, this should not be a problem. When the music class put on Beauty and the Beast, for example, the costumes were made of mere cardboard, yet the audience was still enamored by the dancing cutlery; it may not have been realistic, but it was believable.

Most kids are really excited for the show. “I just love the nonsensical words and funny banter, plus the odd couples in the musical. I can’t wait to be dying of laughter in the audience during rehearsal,” eighth grader Abby Keesler said.

As the new semester begins, the 35 middle and high school music students are attending three or more rehearsals every week. In class, they run music and scenes, ensuring the actors know their lines and blocking. Lower school gym teacher Darrel Ange comes to the upper school regularly to work with groups of the cast. Ange has a great deal of experience with high school theatre. He has had extensive experience with The Music Man as he played Charlie Cowell in his own high school production of the musical.

The cast may be small, but a lot of talent is strung throughout the group. Eighth grader Taylor Chase and ninth graders Bethany Carels and Jackson Philips work alongside parent Tori Hepp as the choreographers for the entire musical. Each Saturday, the instructors meet with 12 students and work on lifts, pirouettes, and demi-pliés intensively for two hours. “It’s tough because I come to musical rehearsal to teach dance right after my own dance rehearsal. I’m usually always tired,” Philips said.

Ninth grader Chris Murray has grown up in a musical family, acting and participating on the tech team for church plays and auditioning for multiple productions at Magnolia Theatre Arts Center, a local community theatre. Murray has been playing cello for eight years; he performed at this past Christmas Concert. “I used to come to all the school rehearsals. It’s a positive environment…this is really going to be my first real musical,” Murray said.

This will be tenth grader Natalie Draper’s fourth year in music. “At the beginning, it was rough because we didn’t really know what we we’re doing. I think we have the hang of it now,” Draper said. Her favorite musical was Beauty and the Beast, but she is looking forward to spending time developing her character, Mrs. Squires, alongside her friends.

The best thing about music class is arguably the inclusive environment. Music is the largest elective mingling the middle and high school grades. Whether it’s sharing a script, practicing harmonies, or eating subs backstage, the students can take a break from being divided by age and just hang out. The ticket to fun is a uniting factor. “I love spending time with my friends, you know, outside of class. In music, we have a great time because we like to perform and perform together,” ninth grader Elly Crabtree said.